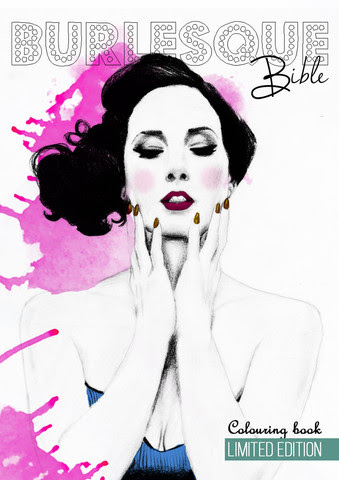 Burlesque Bible, as some of my readers may know, is Europe’s most prominent burlesque-themed magazine. I had the pleasure of having one of my favourite posts printed in the Fall 2013 issue. When I read their newsletter announcing the publication of Burlesque Bible Colouring Book, I immediately pre-ordered it, because, well, burlesque and colouring books!

Adult colouring books are becoming more and more popular. This is due to the proven fact that art therapy reduces stress. While adult colouring books are not the same as art therapy (which should still be done with an educated therapist), colouring can help with symptoms of depression. Why? Because it is manual work, which helps alleviating anxiety by focusing on the work at hand. And it’s good for you especially when you’re not comfortable with other forms of creative expression (because you’re filling in an image created by someone else, which is safer). In addition to this, you’re working with colours and you can see the result of your work instantly. Plus, these colouring books for adults are just so damn pretty.

Burlesque Bible Colouring Book is the fourth colouring book I bought. I also have two art deco colouring books and a Harry Potter one (Slytherin pride!).

What Do I Think?

Honestly, I thought there would be a bit more illustrations. For £5.50, 16 pages is not very much. Also, I’m not a big fan of the sketchy style of the illustrations. But I love the quality of the publication and the idea behind the book is sooooo me so I’m looking forward to channeling my inner Olivia De Berardinis.

You can have a go at it by yourselves and buy the colouring book here! They may be sold out at the moment but if there’s enough interest, Helene of BB promised reprints!

I think everyone needs a little inspiration from time to time. I definitely need it, especially on Mondays, which is why for quite some time now I’ve been posting inspirational quotes tagged #motivationmonday on my fanpage.

I also look for inspiration in the people I admire. Personally, I find that even decades ago the women who are my idols today had some wise things to say. Their quotes remind me to stay focused on making my dreams come true and on being kind to myself. And since I’m a big believer in karma, today I want to share these inspirations with you!

What about you, do you have your favourite quotes that you like to come back to?

You only live once, but if you do it right, once is enough. (Mae West)

It’s all about falling in love with yourself and sharing that love with someone who appreciates you, rather than looking for love to compensate for a self love deficit. (Eartha Kitt)

I believe that everything happens for a reason. People change so that you can learn to let go, things go wrong so that you appreciate them when they’re right, you believe lies so you eventually learn to trust no one but yourself, and sometimes good things fall apart so better things can fall together. (Marilyn Monroe)

The last quote is by a contemporary star, but hey, very vintage-inspired!

You can be the ripest, juiciest peach in the world, and there’s still going to be somebody who hates peaches. (Dita Von Teese)

NOTE: Burlesque is not only about the visual, but the visual is an important part of the show, which I am so happy she talks about in her book.

Dita is perfectly aware that out of all the things she does, most attention is paid to the way she dresses, the way she does her makeup and hair. She has made it her strength and she built a huge portion of her business around it. Think about it – over the years apart from strutting her stuff onstage, Dita was the face of brands such as M.A.C., Cointreau and Perrier, she had her own line of cosmetics, lingerie (there was also a cooperation with Wonderbra if memory serves), stockings (Secrets in Lace), clothes (line of dresses, a cardigan), gloves, sunglasses, perfume, nail kits, and, you know, authored other books (Burlesque/Fetish and the Art of Teese, Dita: Stripteese).

I may have forgotten about something, but this just goes to show how hard-working that woman is!

Now, Dita capitalizes on all the attention around the way she looks, creating a huge book, all about the work she put into transforming herself from Heather Sweet to Dita Von Teese. And spoiler alert: it’s a lot of work.

The book is very much about how to look like Dita, but you can learn other things if you read between the lines. Between the beauty routines there is a tale about unapologetically sticking to the image of yourself that is in your head. It’s reinforced by short interviews with Dita’s friends and collaborators such as Ali Mahdavi, Douglas Little, Gregory Arlt, Sutan Amrull, Catherine Baba, Angelique Noire, Danilo Dixon, Betony Vernon, Suzanne von Aichinger, Carmen Dell’Orefice, Jason Fox. I like these bits – they talk about what glamour means to them and how to incorporate little and big bits of it into your daily life.

There is power in transformation, in creating a look for yourself and sticking with it. While reading the book, I was reminded of the countless situations when my corporate day job colleagues noted on my stiletto nails or my preference for strong colors and figure-hugging designs. In this environment, I tend to stand out. And as a showgirl, I like to stand out. I like to be the girl with huge fantastic cleavage, the girl with the highest heels you will see, with red or pink lipstick and claws that could cut you. It’s inspiring for me to read a book by a glamorous eccentric who makes no excuses and no compromises about her look. This is what she likes and she will stick with it. You won’t catch her without her signature red lipstick. So if she can do it, so can I, just the way I want to. And so can you!

Buy your copy of “Your Beauty Mark” here! (affiliate link)

Christmas is right around the corner, so I thought I’d create a quick wishlist (although I’ve already treated myself to two early presents* – everyone knows the best presents are the ones we give ourselves!)

Why? Several reasons… but mostly why not!

A ticket to Dita’s Crazy Show at Crazy Horse Paris

What a dream trip it would be! Plus a chance to meet my Parisian showgirl friends!

In black, obviously. Worn as a costume rather than underwear, obviously.

…I’m not even going to try and justify that. I’d pick a different colour scheme though. Maybe something red and black, to fit the rest of the gifts 😀

* If you’re curious, this is what I gave myself:

(all  product photos taken from original sites, none belong to me and everything was for informational purpose only)

It’s my birthday today, so I took a little liberty of preparing a wish list of gifts I will perhaps give to myself one day 🙂

1. Maya Hansen corset. I liked the Cake line the most but unfortunately it’s mostly unavailable now. However, after seeing the corset available in LiParie, I’d gladly have any of them. They’re beautifully made.

2. A Lady Carotta dress. Again, when I look at them, I’d gladly have them all 🙂 But the houndstooth one would be great both for work and for a retro party.

4. A ticket to London Burlesque Festival. One of the biggest burlesque festivals in the world. 10 evenings filled with shows from stars such as Catherine D’Lish, Marianne Cheesecake, Eliza Delite or our own Betty Q! I think this one doesn’t really need a justification either 😉